Why We Love The Pine Beach West

Pine Beach West at Madden’s opened March 31, 2017 for its 52nd season.  This may be the earliest open date ever, certainly in recent history!


Did you know Pine Beach West was originally called the “Sylvan Course”?  The Back9 opened in 1965 followed by the front 9 a short time later.

Golf course architecture in the 1960s era is fascinating. Courses were built to be challenging but not like stepping into the ring with a heavy weight boxer.  You could score and experience success. Golf was fun and exciting, golfers would go around and around, and the game grew.

Two things I love most about the West Course.

First, the variety of holes requires a wide range of shots to navigate the course. There is a nice mix of short par 4’s, long par 4’s, two challenging but reachable par fives and seven par 3’s that you won’t use the same club twice.

Second, I love playing with my family.  It’s relaxed and the perfect intermediary course between a Par 3 and championship course to learn the game.

The next time you’re in the area be sure to play Pine Beach West at Madden’s. You may not have more fun on a golf course all year! 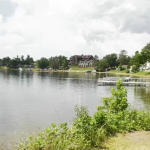